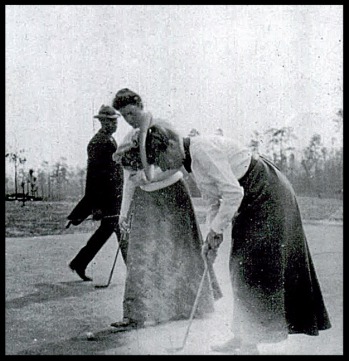 Members enjoy a round of golf at Millwood Country Club, circa 1910s

The Blue Ridge Club dates back to the late 1800s when its clubhouse was located in the village of Millwood on Bishop Meade Road, across from what is now the Black Penny. With a bar, pool table, and little else, the early club offered local grandees the opportunity to enjoy themselves away from the demands of home and farm. Many of the hunting prints and coaching paintings that adorn the current clubhouse walls came from the original Bishop Meade Road location.

Around 1910, the clubhouse moved to the Clark House at the foot of what is fondly known as the Millwood Hill, at the junction of Routes 255 and 723. The Clarke House is an historic one. General John S. Mosby nearly surrendered his famous Raiders there during the Civil War. But the Blue Ridge Club’s tenancy at the Clarke House was short lived.

Enter Roland and Susan Page Mitchell. Roland, a New Jersey native, married Susan Page, who was born at Saratoga in Clarke County. In time, Mitchell and Susan moved their family to the Glen, an estate abutting Saratoga. Around 1915, Roland, an ardent golfer, persuaded the Blue Ridge Club to relocate to a portion of the Glen in the hopes that a golf course could be established. Susan would later donate this land to the club in her husband’s memory. Today’s clubhouse stands on the portion of the Glen the Mitchells gifted to the Millwood Country Club.

In 1917, the club leased property for a nine-hole golf course from the Meadowbrook estate just to the east of the club grounds, and Peter Mayo of neighboring Powhatan, now the site of the school of the same name, provided funds for the course construction.

By the middle 1920s, the clubhouse, a spring-fed pool, and two clay tennis courts had enriched the amenities, and in 1957, the land leased for the golf course was purchased and added to the club’s fold. An additional four-acre gift in memory of Henry Mitchell completed the current contours of the club’s property.

A series of assessments in the early 2000s underwrote the expansion of the clubhouse to provide a more ample event space and a large, beautifully appointed kitchen, professionally designed for entertaining. In 2016, the modern pool’s deck was doubled in size for the enjoyment of our members’ families. While the club continually seeks to improve amenities for its members, the spirit of the club does not change: we remain a low-maintenance, unpretentious venue where people of good will gather together for sport, relaxation, and the pleasure of one another’s company.